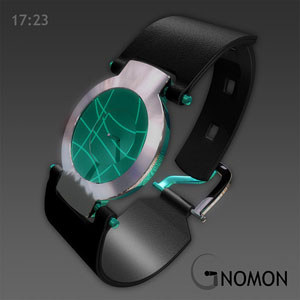 A rare stone, polyhedral sundial discovered in England, and thought to date from the Scottish renaissance, sold April 7, 2011 for £16,250 (\(26,500) at Christie's South Kensington, London.

The sundial discovered in 1974, and thought to date from the Scottish renaissance, went on the auction block this April as part of Christie's Travel, Science and Natural History sale in London.  The dial is made of stone and technically described as a polyhedral dial, with several independent sundials arranged on different facets of the stone.  Pre-auction estimates placed a value somewhere between £7000 and £10,000 (\)11,400 and $16,300) but sold for nearly three times the initial estimate.

Avid dialist and former The Grammar School teacher and head of the Putney, VT school, Mac Oglesby guides 6th graders to plan and construct their own working sundials. Oglesby's students learned how to correctly position their dials to display the accurate time throughout the year.

Ask a person what is the earliest evidence of humans building structures to mark significant celestial events, and one offer "Stonehenge".  But there may be a structure built thousands of years early according to some experts in Australia.

A site "down under", name Wurdi Youang, estimated to be older than 10,000 years, has a strange arrangement of stones with alignments toward solstices and equinox that has been scrutinized by several eminent Australian scientists.  They conclude that the placement and alignment of the stones is not an accident and there is a perfect alignment with the setting sun on the mid-summer day. Understandably, the exact location of the site is a well-guarded secret, but it is known to be west of Melbourne approximately 80 kilometers. 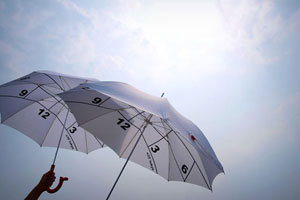 Primarily an industrial designer, Kota Nezu has designed a parasol for people who use their umbrellas for shade as well as staying dry.

With just a little bit of effort, Nezu's dial can be used to tell the approximate time of day and season of the year. The parasol comes equipped with a small compass to aid in lining things up.  And even though a true sundial aficionado might point out that a proper dial has to be designed for a specific latitude, this handly umbrella is sure to be a conversation starter come rain or shine.

The Recreation Center Sun City (RCSC) Board of Directors has decided to repair the sundial monument at the corner of 103rd Avenue and Boswell Boulevard [in Sun City, Arizona].

At this time, it is impossible to know an exact repair cost until further inspection can be made below the surface. We do know that the three steel supports at the foundation must be repaired to restore the steel supports’ structural capacity to ensure further deterioration does not occur.

Society, are winners of the City of Bowie sundial contest to build and install a dial in front of the New City Hall under now construction. The value of the project is $90,000. Completion is expected in Oct 2010. 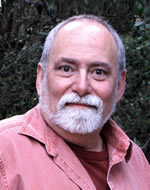 Gino Schiavone: After studying Liberal Arts at Loyola University and Fine Arts at Chouinard Art Institute in Los Angeles I began a career of what I called “making wonderful things.” Some thirty years ago I happened upon some books about sundials at a library. This happy accident changed my life. These books introduced me to the wide range of sundials and methods for their design. I was enthralled and inspired; I was in love. I decided to make fine sundials and embarked on a new course of study.

We have 703 guests and no members online