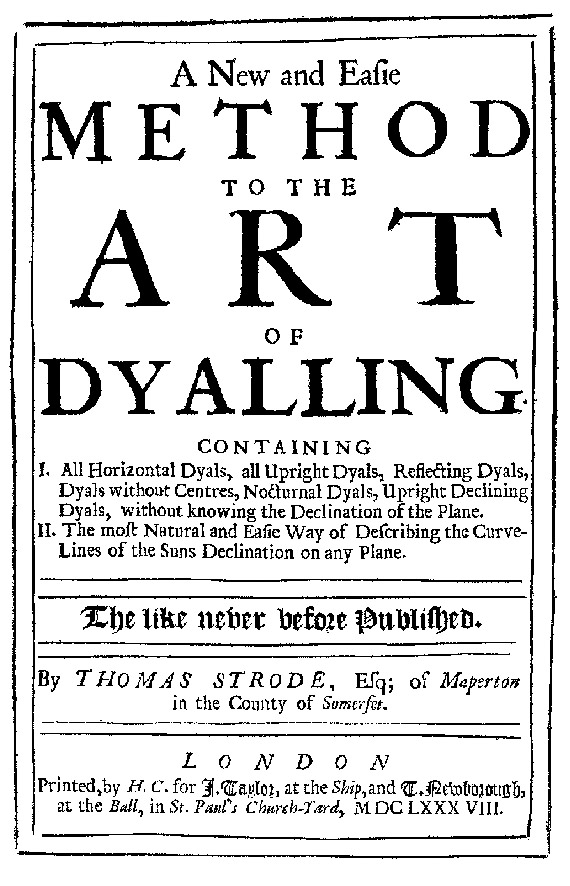 Thomas Strode- A NEW AND EASIE METHOD TO THE ART OF DYALLING.

CONTAINING I. All Horizontal Dyals, all Upright Dyals, Reflecting Dyals, Dyals without Centres, Nocturnal Dyals, Upright Declining Dyals, without knowing the Declination of the Plane. II. The most Natural and Easie Way of Describing the Curve-Lines of the Suns Declination on any Plane. The like never before Published. By Thomas Strode, Esq; of Maperton in the County of Somerset. LONDON. Printed, by H.C. for J. Taylor, at the Ship, and T. Newborough, at the Ball, in St. Paul's Church-Yard, MDCLXXXVIII. 1688.  (72 pages)

"To The Reader. Courteous Reader, This was chiefly composed for some near Relations; but the Method being Natural, Easie, and not Common, I think I ought to communicate, and not to Bury it with me. I do not Publish this as to prefer it before Trigonometrical Calculation of Dyals, for no way can be Exacter than that; but this is to save that Labour in Young Beginners, lest they should be dejected with the tediousness of the other: And this Discourse but little short in Exactness with that...

"The Method of drawing the Parallels of the Suns Declination, will give (if I am not deceived) a Diversion to those of the Highest Forms in the Mathematicks, being not Extant (as I have great reason to believe) in any Author; being grounded on such Paradoxes in the Conicks, That some of them on the first View will hardly be admitted; for with Gratefulness, I do acknowledge, That I received Seeds and Plants from some eminent Persons of the Royal Society, since deceased; but being removed into my barren Soil, and Cultivated and Manured according to the new Husbandry, produced Fruit beyond my Expectation, whereof this is part; besides their Geometrical way of Delineating their Curves, I have for the Latitude of London, in a Direct South Dyal, given the Distances of the Points of the Hyperbole on Parallels to the Transverse Axe, from the Conjugate, which by a Diagonal Scale will quickly be placed."

This can be ordered from LuLu Books: Strode: A New and Easie Method To the Art of Dyalling (1688)