Steve Hines developed the first true digital sundial in 1984 routing illuminated optical fibers in a cylinder to 7-segment numbers display hours and minutes. Ultimately he received US Patent 4,782,472 on November 1, 1988 for a “Solar Clock with Digital Time Display”. Steve is an inventor of many optical devices, but as he recalls, “Sundials had not been a strong interest of mine before I started this project. I knew that there were analog sundials on horizontal and vertical surfaces, with the gnomon having to be parallel to the earth’s rotational axis. However, I wondered if it would be possible to create a true digital sundial with a display made up of 7-segment numbers like on a clock radio. By defining the problem as an optical analog-to-digital converter made it all the more interesting, suggesting further uses beyond being a clock.”

Steve Hines continues,“This concept was just quirky enough to rivet my attention. I was hooked. The expectation that it would not be commercial did not deter me at all, and it has wildly exceeded those expectations. The fascination for me was finding the optical and geometrical solution of converting the slowly-moving sun into blinking segments of light to form human-readable numbers.” 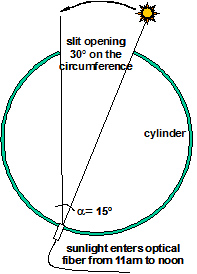 “I thought early on that I had nailed the solution based on sunlight shining through slits of a half cylinder shining onto optical fibers glued to a vector board. When tested in the middle of the day a “hour” seemed to display correctly for an hour of time. The problem of this approach was that an “hour” on the dial did not last an hour of time in the early morning or late afternoon. [Thew, who erarlier invented an analog sundial casting numbers from a half-cylinder band had to change the width of his numbers to account for this effect.] The breakthrough came by mounting the optical fibers on the back, and the entrance slits on the front of the same full cylinder.”

By using a cylinder, Steve Hines exploited the property of constant angular view from an opening anywhere inside the cylinder as shown in the figure at right  This allowed Steve to define hour and minute slits to shine light onto a particular optical fiber at exactly the right time and for the right duration. Thus his wish to develop an optical analog-to-digital converter was practical. Steve Hines patent notes show a schematic of how at each hour portions of a 7-segment number are illuminated. In these notes he observes that “the angular subtense of the sun's diameter is about ½o, equivalent to motion for +/- 2 minutes. Therefore, the maximum temporal resolution for any clock is 4 minutes.” He chose time divisions of 10 minutes, a time mark followed later by other digital sundials. 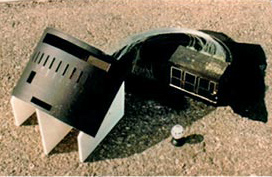 At left is Steve's first prototype of the digital sundial (Sept 14, 1984), confirming that slits on a cylinder accurately illuminate optical fibers that route sunlight to a 7-segment number display.

The detail of assembling a more refined version of the digital dial is shown below.  Each number segment of Plexiglass has several optical fibers attached.  The segments are assembled into a display box and the optical fibers are run to various illuminated spots on the cylinder.  These spots will be illuminated at the correct time by slit openings on the opposite side of the cylinder.  In the bottom row of photos you can see Hines assembled digital sundial and display at the north end.  Why at the north end?  It prevents the user's shadow from getting in the way of the cylinder and prevents the direct sun from shining onto the display.  The optical fibers could have been any reasonable length and routed to the display at a convenient location, even indoors for a remote reading sundial. The display's black color increases the contrast.

For more pictures of this digital dial, plans and many other wonderful patents by Steve Hines, visit www.HinesLab.com

Steve creates slits openings that are longitudinally straight. This provides sunlight illumination of the optical fibers according to local solar time. In theory the digital clock could give accurate clock time (civil time) by using a set of analemma shaped curves for the slit opening. The figure below shows Hines original cylinder mask at far left.  In the middle are two analemma masks created by Robert Kellogg (another digital sundial inventor) to be used from June-December and December to June, and at far right, the analemma figure for a pinhole casting light onto the ground each day at solar mean noon.

This proposed analemma scheme will not work in practice as it requires two complete masks (or two sundials) and will only work if all of the optical fibers assigned to a particular time interval are clustered into a point positioned half way between the slit ends.  Steve Hines comments, "About the analemma and curved slits… I had thought of the concept of clustering all the fibers into a “point” to be able to use the analemma."  But in the real world, he continues,"I felt I needed fibers large enough to get a bright display..."  which clustered together would not make the ideal "point".  As for periodically changing the dial mask sets, Hines wisely states "My preference in getting the most from a sundial is to have it as maintenance free as possible."

There is an interesting theoretical restriction to Hines’ cylindrical dial and other dials that use refractive mediums. Physically, light cannot enter a fiber optic at angles much beyond its the “numerical aperture”, representing Snell’s law of refraction of light going from air to a refractive medium. For example, if a glass fiber has an index of refraction of 1.65, then the maximum off-axis ray is 37.3o, or a little more than 2 hours time for the cylindrical geometry.  This only allowing a total of 4 hours operation. Steve Hines recognized this theoretical limitation early in the sundial design and roughed up the ends of the optical fibers with fine sandpaper to allow light from greater angles to enter the fiber and p[ointed them toward the optimal slit alignment. Nothing succeeds more than practical insight. This is what makes Steve such an outstanding inventor.

In his words, "My overriding goal was to create an optical analog-to-digital converter, which I feel like I did."  Below are Steve's original notes for explaining his invention of the first digital sundial.