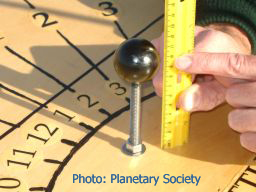 The Planetary Society and Bill Nye, The Science Guy, are bringing back the Earth Dial, which is a simple to make gnomonic horizontal sundial reminiscent of the sundial incorporated into the Mars rovers Spirit, Opportunity and now Curiosity.  Their original and fundamental purpose is to serve as test patterns for the rover cameras, but they also provide an opportunity as unique shadow casting sundials.

“Since we had shadows being cast on Mars, I suggested it be a sundial… I admit I was quite enthusiastic about it. Steve Squyres, the Principle Investigator on the Spirit and Opportunity missions, made the call, and the Mars Dials were created. He received the [Planetary] Society’s Cosmos medal a few years ago, for his wonderful leadership of the project.”