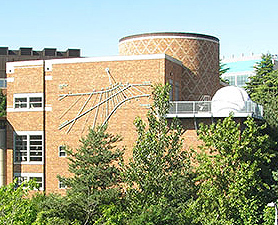 Want to watch a sundial in action?  Professor Woodruff Sullivan and Ian Smith at the University of Washington in Seattle have just launched an active webcam of the University’s large vertical declining sundial on the side of the Physics and Astronomy building.   The webcam image is updated once per minute day and night. “we know that some of you will want to stare at it for hours on end (or at least bookmark it….”

Their website has many features including the first two time-lapse movies of the giant sundial showing the all-day shadow on the summer solstice and on the autumn equinox. More time lapse videos will be presented during the months that come.  In the near future they will improve the present camera with higher-resolution and greater reliability.

A flurry of sundial webcams existed in 2004-05 when the EarthDial Project, the invention of Bill Nye and Woody Sullivan, was run under the auspices of The Planetary Society. The Project, with a motto Two Worlds, One Sun was run in conjunction with the MarsDial Project, which involved the Mars Exploration Rovers Spirit and Opportunity, each of which landed on Mars in 2004 with a small calibration target turned into a Mars sundial on its deck. People around the world were urged to build sundials of a standard design and display them to the world using a webcam. Click Here to See Time Lapse Movies of Some of These Dials.  A new Mars sundial will arrive red at the red planet next August onboard Curiosity.

Take a look at the new webcam at http://sunny.astro.washington.edu