Goikhman explains: " The Greenwich Globe's shape was generated by an algorithm that treated time as physical matter.  Each additional hour is represented through a constant degree of elevation and a 15o angle bend.  The elevation based map projections gives easy-to-read shape to the complex man-made system of time-zones.  It also operates as a sundial, a play on the now familiar row of world time clocks.  The shadow it casts on a wall is meant to be read as a world watch.  Each spike in the shadow shows the local time at a corresponding geographical region."

The idea of time zones began in 1879 with Sir Sandford Fleming, Chief Engineer of the Northern Railway Grand Trunk Railway proposing time zones at the 75th 90th, 105th and 120th west meridians from Greenwich.  A mathematician can easily divide the globe into 24 uniform zones of 15o shifting time sequentially by one hour.  But politics and trade intrests have intervened around the globe, shift time zone boundaries to national interests, resulting into an intricate pattern of time shifts, some only 30 minutes wide.  This goes back to the 1884 International Prime Meridian Conference held in Washington, D.C.

Alisa Goikhman's representation of these varied time zones is quite striking.  At her website you can see more images of the Greenwich Globe and a video briefly but accurately explaining world time zones. http://alisagoikhman.com/projects/greenwich_globe/  You can also find her video on this website at http://www.sundials.org/index.php/dial-links/videos?start=20

The use of time zones was almost immediately adopted by the railway companies in Canada and the United States, agreeing upon Fleming's time zone proposal on November 18, 1883.  It simplified the train schedules of arrival and departure times from municipalities along the routes.  Within a year the system proved so successful that it prompted the United States Congress to formally authorize the President to hold an international conference for the purpose of “fixing upon a meridian proper to be employed as a common zero of longitude and start of time-reckoning throughout the globe”. 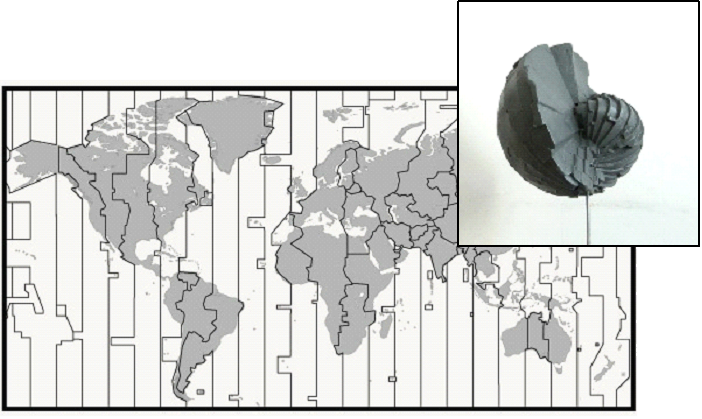 In October 1884 the International Prime Meridian Conference was held in Washington, D.C.   At the time of the conference each nation used their own Prime Meridian.  For example a number of US state boundaries were defined in terms of the prime meridian of the United States.  In 1890 a Meridian Stone was set in the center of the Ellipse in front of the White House intended to be on the same meridian as that defined by Thomas Jefferson in1793 and marked by Jefferson's Pier in 1804.  Officially, on September 28, 1850 the US Congress established  that “...the meridian of the [Naval] observatory shall be adopted and used as the American meridian for all astronomical purposes and … the meridian of Greenwich shall be adopted for all nautical purposes.”

France would have liked the Paris observatory to be the international meridian since it was the basis for more than 2600 hydrographic charts.  Fleming, one of the British delegates, pointed out that based on the number of international ships and tonnage, “It thus appears that one of these meridians, that of Greenwich, is used by 72 percent of the whole floating commerce of the world, while the remaining 28 percent is divided among ten different [national] meridians.”

Countering this, French delegate Mr. Lefaivre argued that the meridian should be chosen on scientific grounds, not on national interest.  Others, including Fleming, were in favor of a “neutral” meridian for the start of the universal day to be situated 180 degrees from Greenwich because “it does not cross any continent” and “it coincides exactly with that line where, after the custom introduced by a historical succession of maritime discoveries, the navigator makes a change of one unit in the date.”

1.      We agree to choose as the prime meridian for cosmic time that meridian near which the civil day of the world commences, namely, the anit-meridian [180 degrees away from]f Rome, Greenwich, or Havre.
2.      The cosmic day consist of 24 hours and commences at midnight of the prime meridian.
3.      The earth is divided from the initial meridian into twenty four hour spaces [zones], counted in a direction contrary to the movement of the earth from 0hr to 24 hr.

After a recess, the vote was taken.  It lost.  Other proposals were made such as “...recommending the mean noon at Greenwich as the commencement of the universal day” that was and is the common practice of astronomers to this day (now called the Julian Day).  Others suggested the international date change at Greenwich midnight. Another interesting resolution by France, was the decimalization of both time and angle. That resolution passed unanimously, but  it seems that the decimal time system has never caught on.

After much heated debate the 1884 Conference resolved in the Final Act:

1.      That it is the opinion of this Congress that it is desirable to adopt a single prime meridian for all nations in place of the multiplicity of initial meridians which now exist.
2.      That the Conference proposes to the Governments here represented the adoption of the meridian passing through the center of the transit instrument at the Observatory of Greenwich as the initial meridian of longitude
3.      That from this meridian, longitude shall be counted in two directions up to 180 degrees, east longitude being plus and west longitude minus.
4.      That the Conference proposes the adoption of a universal day for all purposes for which it may be found convenient, and which shall not interfere with the use of local or other standard time where desirable.
5.      That this universal day is to be a mean solar day; is to begin for all the world at the moment of mean midnight on the initial meridian, coinciding with the beginning of the civil day and date of that meridian; and is to be counted from zero up to twenty four hours.
6.      That the Conference expresses the hope that as soon as may be practicable the astronomical and nautical days will be arranged everywhere to begin at mean midnight.
7.      That the Conference expresses the hope that the technical studies designated to regulate and extend the application of the decimal system to the division of angular space and of time shall be resumed, so as to permit the extension of this application to all cases in which it presents real advantages.

While Sir Sandford Fleming lobbied for the use of time zones separated at 15 degrees (that is, at one hour intervals), it was not approved at the 1884 Conference.  Ultimately standard time, using the railway adopted time zones, was officially established in the United States with the Act of March 19, 1918, called the Standard Time Act. The act also established daylight saving time in the nation for support of the Great War (World War I). Daylight Saving Time was repealed in 1919, but Standard Time using time zones has remained the law ever since.