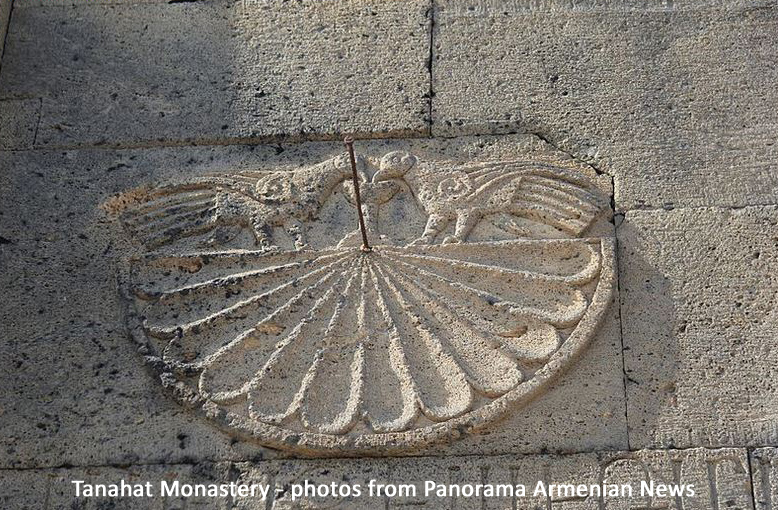 Last February in the Panorama Armenian News an article reviewed some of the oldest sundials in Armenia. Piliposyan, Doctor of History at the Preservations Service for Historic-Cultural Reserve-Museums and Historic Environment (SNCOT) related that the oldest sundial may be on the Zvartnots temple dating to the 7th century. Sundials have been preserved on buildings of Dsegh, Tsakhkadzor, Dilijan, Noyemberyan as well as Nagorno Karabakh churches. Sundial also were curved on khachkars [Armenian cross-stones]. In the Panorama article Piliposyan said that apart from serving as clocks, sundials served as a means of communicating with god. He brought the example of the Zvartnots temple sundial found during excavations with enclosed documents calling on prayers to talk to god whatever time it was.

The vertical dials had horizontal gnomons and on the dial face there are typically 12 equally spaced divisions to mark the hours. Frank King commented on the dials that "These are variants of the standard European sundials used for indicating 'unequal [temporal] hours', at least approximately, in medieval times. Several thousand survive in England alone. They divide the daylight period from sunrise to sunset into 12 parts. Unfortunately, these parts are not equal in time and their relationship varies with the time of year....The examples in the photographs seem very nicely made."

To appreciate the Medieval Armenian dials as well as modern interpretations, visit https://www.panorama.am/en/news/2019/02/23/Armenian-sundials/2076856