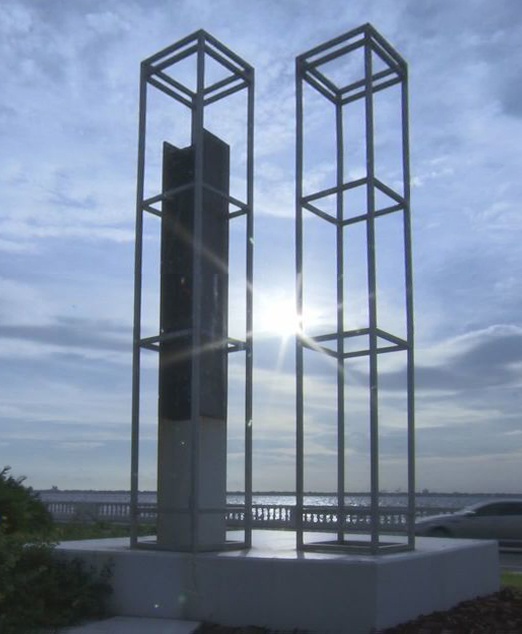 It has been 17 years since 2001 when on September 11th terrorists attacked the world trade center and the Pentagon.  To memorialize this tragic event artifacts from the Word Trade Center are now in 1,100 cities, large and small, across the country that have received portions of the Trade Center wreckage from the Port Authority of New York. In Tampa along Bayshore Boulevard near Bay Boulevard is a striking memorial.  Here is a World Trade Center in miniature, represented as two tower outlines, matching the orientation and scale of the site in New York City.  Thin aluminum members rise from the memorial  base, tracing the placement, material, and proportions of the twin towers. The memorial is one one-hundreth the scale of the actual towers and site.  The memorial was dedicated on Friday, September 9th, 2018.

Interviewed by Fox 13 News of Tampa, John Thompson of Wilder Architect who designed the memorial explained, "So we put [the steel I-Beam from the Tower, setting] it standing straight like the column in the North Tower, symbolically."  Thompson continued, "The column for the World Trade Center acts as a sundial...There's a portion of concrete base that in the morning of September 11th when the shadow of the column hits that particular piece of concrete, that's the [time of] impact of the plane on the north tower.  As the morning carries on, when the column shadow falls off the concrete, that's when the building fell."  American Airlines Flight 11 hit the World Trade Center at 8:46am.  After burning for 102 minutes, the north tower of the World Trade Center collapsed, killing approximately 1,400 people.

According the Fox 13 News, "It's a place where joggers stop to pray and groups stop to reflect, such as the Bayshore Patriots, an organization where members stand at its corner every Friday to wave the U.S. flag at commuters.  Thompson invites everyone to come out the morning of 9/11 and see the sundial."