Today it is snowing in Washington DC and it brings to mind a winter some 43 years ago when the Washington Monument was turned into a sundial.  Over the years many have proposed turning this spiring monument into a sundial.  For example at the first North American Sundial Society (NASS) Conference in 1995 Robert Terwilliger drew a map of the shadow's excursion from Independence Avenue to E Street NW, repeated here at left. In June 2011 in the NASS Quarterly Journal The Compendium Robert Kellogg suggested that "...the precise shadow lines drawn in [Terwilliger's map] are precise geometrical constructs.  The problem is the sun is not a point source, but a disk about 1/2 degree in diameter.  The result is the sun casts a penumbral (partial) shadow when it is partially obscured, resulting in a range of light to dark sunlight that blurs the edges of shadow, making a gradient from light to dark.

To get a feeling for the impact of the penumbral shadow from the Washington Monument, we start with a brief summary of the Monument:   A competition was held in 1836 and won by architect Robert Mills who designed a tall obelisk.  Excavation began in early 1848 and the cornerstone was laid as part of the 4th of July ceremony by the Freemasons.  Lack of funds created a hiatus in construction in 1858, and finally the capstone to create a pyramidal point to the obelisk was laid December 6th, 1884. The obelisk as we see it today is 169.29 meters tall, 16.8 meters wide at the base and 10.5 meters wide at the start of the capstone pyramid.  The pyramid itself is 17m tall, with a small aluminum capstone at the tip and by the time the sun is sufficiently blocked by the top of the oblesk for us to see the shadow, the sun is well below the tip. 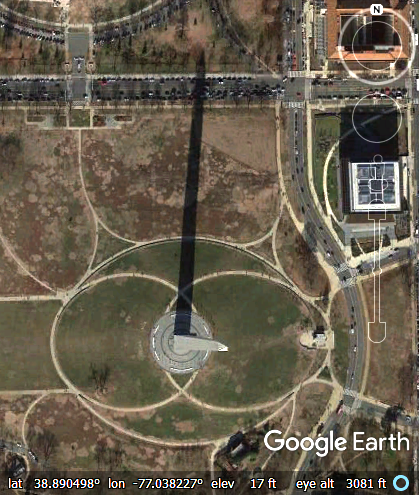 In The Atlantic on-line issue of May 23, 2014 Robinson Meyer found that the Washington Monument captured the imagination of Google Map engineers: "Ken Norton, a partner in Google Ventures, reports that the digital shadow has reflected the real shadow’s position for about three years. [now, 6 years] It’s a fun accent, possible only with the kind of live, dynamic map that Google deploys...Google didn’t need to add the monument’s shadow, but it did, as a kind of homage to the world’s hidden-in-plain-sight details. Of course, Google’s unknown mapmaker wasn’t the first to notice the monument’s shadow. 'As an artist, one of the things that I do...and I think most artists traditionally have done...is point out things people don’t see.' ”

Which brings us back to the snowing day 43 years ago on February 11, 1974 when Yuri Schwebler decided to turn the Washington Monument into a sundial. In her article Meyer continues: "He was, by day, a newspaper layout designer...[but] before Google made its sundial for the screen, Schwebler turned the monument into a real (gigantic!) one in the winter of 1974:"

Schwebler said, "One day I realized I’d never seen the shadow of the Washington Monument because it’s so huge. And then one day I looked for it, and I saw it, and it moved. I was at the end of the shadow, and it moves about four feet every minute."  His materials for such a transformation? According to CBS, $24, six feet of snow, and a plow on loan from the National Park Service. During the report, Schwebler, who died in 1990, is asked why he turned the monument into a sundial at all. His answer?  "You can actually see the Earth move, or feel it move, by watching that shadow."

Click on the video above or watch it on YouTube at https://www.youtube.com/watch?v=_M5WXcVsfIk to see Walter Cronkite of CBS news report on the Washington Monument as a giant sundial.