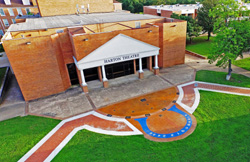 The large analemmatic sundial in front of the Harton Theater North Entrance of Southern Arkansas University (SAU) is being formally dedicated on Thursday, November 5th, 2016 in memory of the late David Thomas Smith, a 1957  SAU alum and  retired assistant director of the SAU Physical Plant.

The Smith Sundial, funded by family and friends of David Smith was built by the SAU Department of Art and Design and engineers of the SAU Physical Plant.  Patrick Finney was the construction supervisor and Steven Ochs was the project concrete art designer and craftsman.  As described in the NASS Sundial Registry, Dial #800 is "a 22 by 17 foot analemmatic dial of stained concrete with Arabic hour numerals of polished brass.  The dial perimeter and hour numerals are set in a blue decorative polymer "U" arc, appearing as a large mule shoe that represents the university Muleriders mascot symbol.  Dial colors represent the royal blue and gold school colors."

As reported by Southern Arkansas University, "The Smith Sundial at SAU is one of only four Arkansas sundials that are registered on the North American Sundial Society, and the only one outside of Little Rock and North Little Rock. It is also the only sundial in the state that is [a monumental] analemmatic..."