The Anthem Veterans Memorial in Anthem, AZ was dedicated on November 11, 2011 at 11am (11-11-11 11:11:11) to honor the service and sacrifice of the United States armed forces and to provide a place of honor and reflection for veterans, their family and friends. Veterans gather here annually on November 11th to watch a solar alignment at 11:11am when the sun precisely illuminates The Great Seal of the United States. The memorial was designed by Renee Palmer-Jones, and constructed under the guidance of Project Engineer Jim Martin and construction expert Steve Rusch.

Five years ago in 2009 RADM (Ret) Ron Tucker began an effort to create a Veterans Memorial in Anthem, AZ. Ron knew Renee Palmer-Jones, a gifted local artist and sculptor, whom he asked to create a memorial design. He then went to other Anthem friends, Jim Martin and Steve Rusch who enthusiastically joined the project which eventually would cost $190,000.

Renee's first sketch of the memorial was a drawing on the back of a napkin emphasizing the sun's alignment. She envisioned five marble pillars ranging in size from 6 feet to 17 feet standing in a row to honor the veterans of the five military services (Army, Navy, Marines, Air Force, and Coast Guard). Within each massive pillar is an elliptical opening, precisely aligned to allow a beam of sunlight to shine on a mosaic of The Great Seal of the United States at exactly at 11:11am every year on November 11, Veterans Day (Armistice Day). Renee said, "My intent was to make Veterans Day significant and to distinguish it from any other day of the year by using the sun's azimuth in Anthem at that exact time." (Sundialists realize that the sun's declination of -17.28o on Veteran's Day also occurs around February 1st causing a second solar alignment at the memorial.). 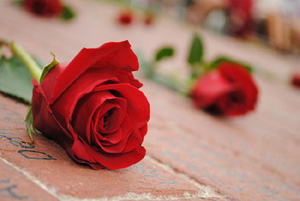 Martin's technical and engineering experience was complemented by Rusch's construction knowledge, allowing the planning committee to make effective construction choices. The memorial was constructed by Haydon Building Corp and the Great Seal was manufactured by Rock Hard Designs and Surfaces of Phoenix. Anthem resident and project chief engineer Jim Martin was responsible for aligning the memorial pillars accurately with the sun. He said "The position of the sun became the primary design element relative to the placement of the pillars and the elliptical openings that pass the sun's rays through the structures...Trigonometric functions were used to calculate the angular projection shadows of the pillars onto the horizontal [ground] surface, and the elliptical openings in the columns were calculated to illuminate a perfect three-foot diameter circle to match the outline of the Great Seal..."

Nearly 3000 Belden brick pavers surround the memorial pillars,with 750 of them inscribed with names of U.S. servicemen and women to form a Circle of Honor that represents an unbreakable border of service and dedication. The Ohio red brick pavers, white Italian Carrera marble pillars and blue sky represent the colors of the American flag. 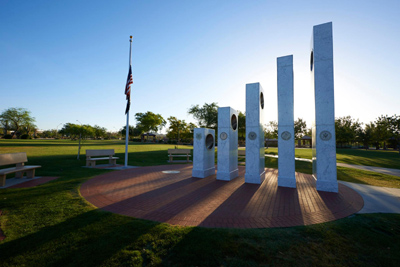 The memorial has received may awards including: