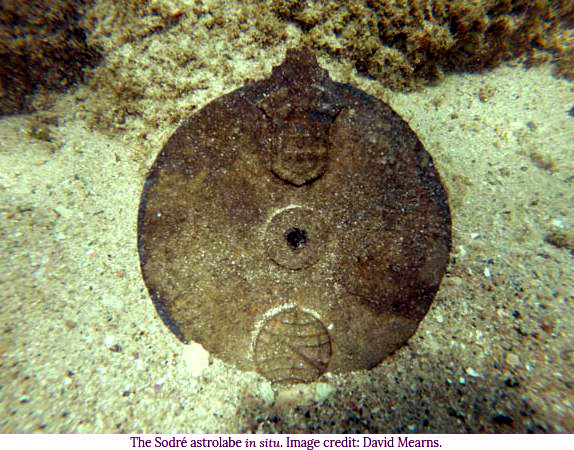 A team led by David Mearns reported on the oldest Mariner's Astrolabe in a recent article of the International Journal of Nautical Archaeology. During a 2013-2014 series of diving expeditions off the coast of Oman they discovered a Portugues solid leaded-gunmetal disk astrolabe. As the authors put it, "A well-documented and dramatic story from one of the earliest Portuguese foyages to India ... involves the loss off two naus [sailing vessels], the Esmeralda and Sao Pedro, which sank in shallow waters off the coase of a remote Omani Island in the Arabian Sea." What has made this legend is that these ships were part of a Portuguese armada to India led by the legendary explorer Vasco da Gama. Mearns tells the story that following the return of da Gamma and the main fleet to Portugal in February 1503, Vicente and Bras Sodre, uncles of da Gama, led their two ships back to patrol the waters off the south-west Indian coast. But Vicente sailed his squadron to the Gulf of Aden where they looted and burnt a handful of Arab ships. "Vicente then took his ships to Al Hallaniyah ...where they found a safe anchorage to shelter from the south-west monsoon...It was in this location, in May 1503, where a sudden and furious wind tore the two naus from their moorings and drove them against the rocky shoreline smashing their wooden hulls and causing the deaths of many crew, including the squadron commander Vcente Sodre"

Recovered from the ocean after 500 years was the 17.5 cm 344 gram metal Sodre astrolabe as well as more than 2000 other metal and ceramic artifacts. The were slowly desalinated over a period of two years. The astrolabe was clearly decorated with the Portuguese royal coat of arms at top and an esfera armilar (armillary sphere) at bottom. But there was no alidade or any visible gradations. Using laser imagery a total of 18 scale marks became visible along the limb of the upper right quadrant with a spacing of 5 degrees. These marks probably extended to make a full 90 degree quadrant. The solid metal Sodre astrolabe is a rarity, for shortly after 1500 a new generation of open ring astrolabes emerged. An illustration of a mariner's astrolabe from the Boria Chart (1529) shows a ring planisphere with angles marked for 180 degrees. The new open design remaind stable in the wind and became the dominant navigation instrument for the next 170 years. Read the full article at https://onlinelibrary.wiley.com/doi/epdf/10.1111/1095-9270.12353 or a short condensed version at World’s Oldest Mariner’s Astrolabe Found | Archaeology | Sci-News.com