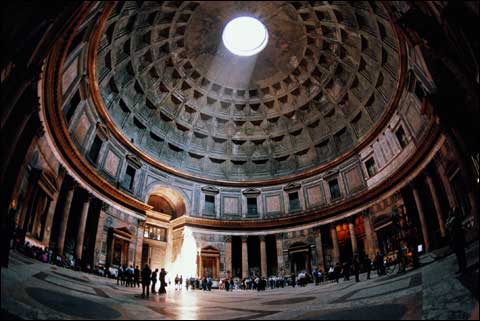 One of the most iconic buildings in the world, the Pantheon in Rome is an enduring testament to the power and glory of ancient Rome.  At the same time, it has also always posed something of a mystery.  The only source of natural lighting is a thirty-foot diameter hole at the very top of the hemispherical dome, often referred to as the "oculus".

Working since 2009, scholars Guilio Magli and Robert Hannah discovered that at midday on the equinoxes, a shaft of circular light shines through the oculus and illuminates the Pantheon's entrance.

As it turns out, the size and shape of the beam almost exactly matches a semi-circular stone arch set above the doorway.  Its been suggested that the positioning of the beam of light would have had significant ceremonial significance if the arrival of the Roman emperor was timed to coincide with the times of favorable alignment.  This discovery adds yet another example of technical prowess to the long list of engineering achievements which have long been regarded as a hallmark of the Roman era.

[Note: For other building alignments check out Meridiana-Solar Lines in the Church here on our NASS website links]