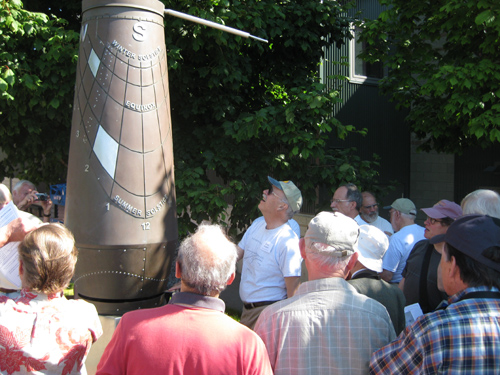 Seattle: Sundial Capital of the United States?  The 2011 North American Sundial Society had perfect blue-sky weather for its annual conference held in August 2011.  Professor Woodruff “Woody” Sullivan, conference host at University of Washington started the fest by showing off the large vertical sundial built in 1994 on the side of the Physics and Astronomy Building.

The conference covered a wide range of topics including two presentations on stained glass sundials, the 17th work of La Hire and his successful "La Gnomonique ou L'art de tracer Des Cadrans" ("Gnomonicks or The Art of Shadows of Sundials") and dialist-surveyor and one of the founding members of the Acadamie Royale,  Jean Picard. The methods of taking photos of the sun over months of time, called Solargraphy, was presented by Art Paque, and then there were talks on the operation of cylindrical sundials, sundials that can show standard time, an update on the Mars sundial, and discussions on solar alignments, heliodons and stair shadows.

Download the PDF and read about the conference in detail, including the bus tour of Seattle dials visiting the Pillar Dial of University Prep Academy, Epiphany School Vertical Dial, and Rebecca Cummins analemma and colored skylights in the ceiling of the Montrose Public Library.