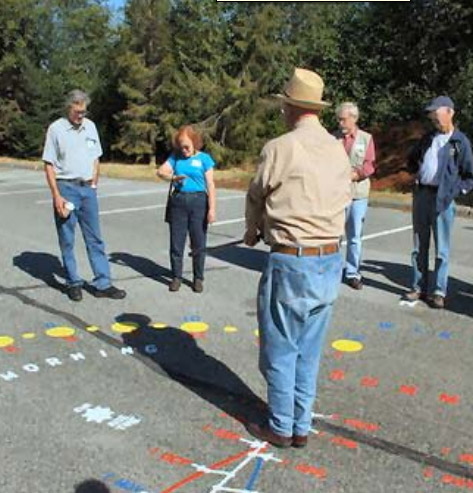 Art meets science: John Carmichael held a workshop on DeltaCAD, a flexible computer aided design program for designing sundials and later in the conference with “Some New Sundials I” showed the result of such designs in beautiful stain glass sundials. From the history domain, Fred Sawyer told the story of Captain Sturmy, a 17th century mariner and author of “Gnomonical Scales,” now part of the Shadow Catchers series.  Len Berggren discussed the sundials of Geminos of Rhodes in his text “Introduction to the Phenomena,” written about the first century BCE.  Chuck Nafziger showed his light concentration sundial with Braille markings to show time-telling to the vision impaired, and Professor Woody Sullivan displayed a prototype of the One-World-Two-Suns Mars sundial. On the pavement of the parking lot, Brian Albinson drew out the split-analemma analemmatic sundial.  See these sundials and more … download the PDF.