The skies were clear for the NASS conference in Tuscon, Az.  Conferee speakers received a replica of the “Fugio” cent, America’s first coin issued in 1787.  This coin was designed by Benjamin Franklin and shows a sundial with the motto “Fugio” meaning “Time flies”.  Continuing the historical theme, Len Breggren discussed the history of sundials to 200 BCE and the work of the Greek geometer Diocles, who described the earliest Greek sundial, a hemispherical mirror that indicated the hour of the day from burning a trace.  Fred Sawyer discussed the overlap of Dialing and Cartography.  John Schilke’s presentation "Oh, East Is East and West is West" was a note on the Prime Vertical, that great circle which passes through the zenith and nadir and the east and west points of the horizon. The Prime Vertical is thus orthogonal to the meridian and to the horizon. Bill Walton presented “Pinholes and Shadow Sharpening” and Bill Gottesman presented a method for measuring wall declination using a carpenter’s square. Saturday’s sundial tour started at the Kitt Peak National Observatory, home of the world’s largest collection of optical telescopes (in 2002) and John Carmichael discussed how one might turn the McMath-Pierce Solar Telescope into a sundial.

Carl Haskett showed off his well crafted patented SunClock design, a pair of semi-cylindrical polar dials adjustable for latitude, longitude and equation of time. When set for the location, the SunClock will show clock time of day and the approximate day of the month. Claude Hartman demonstrated a model of his award winning sundial structure that incorporates ten separate sundials. These dials can be read on the walls and inside the stained glass structure. Bill Walton displayed an analemmatic “Sun Compass” and an interesting Pelekinon double axis sundial. 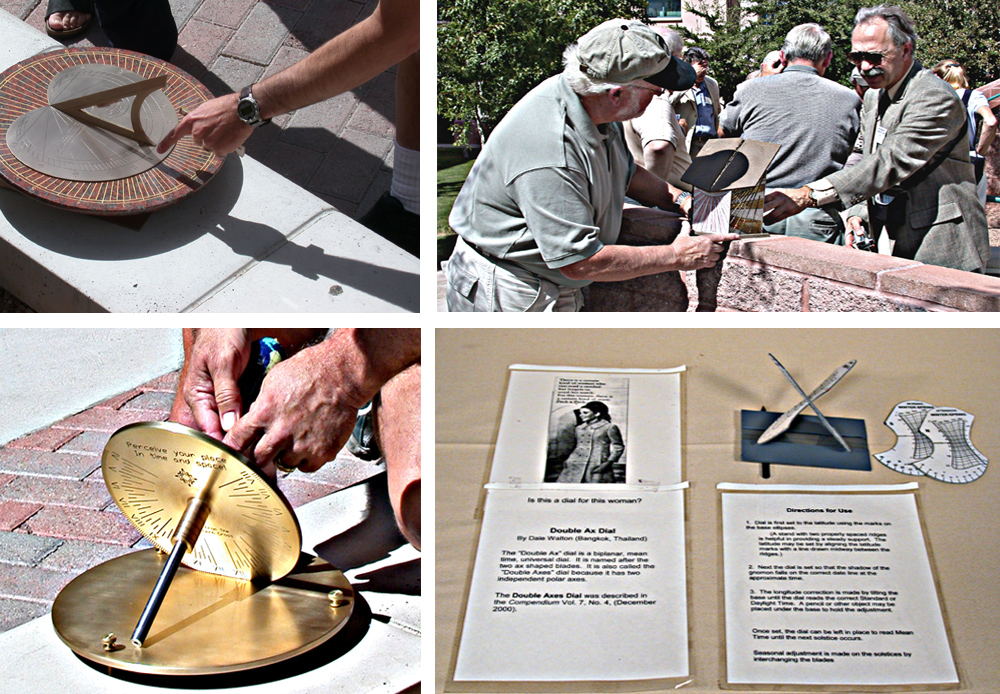