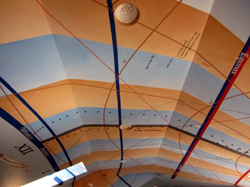 In the May 14, 2013 edition of The Seattle Times University of Washington professor Woody Sullivan was honored as ‘Mr. Sundial’ for his persistence in declaring Seattle as the Sundial Capital of North America. Dr. Sullivan has worked on more than a dozen dials in Seattle, including the large 20x30 foot vertical dial on southwest wall of the Physics and Astronomy building at UW and the elegant 11x17 foot reflection sundial painted on the ceiling of his garage at N 47° 41.232, W 122° 21.562.  A small circular mirror outside the south facing window reflects a spot of light onto the ceiling.

The reflection sundial was a labor of love taking over 3 years to create.  Woody marked over 700 locations on the ceiling that allowed him to draw the local solar time, dates, hours of daylight, solar azimuth and altitude, analemma, and even hours to dawn.  And being a radio astronomer, he marked the transit sidereal time for two radio sources.  The dial was painted with marvelous beauty by a local mural artist, Jim Noonan.  The sundial is very personal to Woody, showing time marks for the date he married to the birthdays of himself, his wife, and two daughters.  The zodiac painted along the ecliptic has a local touch, representing Pisces by a pair of sockeye; Cancer by a Dungeness crab; and Capricorn as a mountain goat. There is even a compass rose.

Fred Sawyer, president of the North American Sundial Society (NASS) is quoted by Erik Lacitis, Seattle Times staff reporter, saying “it’s likely true that Sullivan’s garage sundial is one of the best in North America.”  When the NASS visited Seattle for the 2011 annual sundial conference, they visited Woody’s Reflection Dial and a marker was added to it for the date and time of itsofficial dial dedication held on Saturday 22 August 2011. “We toasted the sundial with an appropriate wine, ‘Wehlener Sonnenuhr’ by Joh. Hos. Prum, the fine Mosel Kabinett from the German vineyard with a large vertical sundial.” said Roger Bailey, the society’s secretary.

Among Dr. Sullivan’s accomplishments in the world of sundials began in the early 1990’s when the University of Washington’s Physics and Astronomy Building was being designed.  He suggested a large vertical (southwest declining) sundial.  The dial was completed in 1994 and Woody was hooked. He also helped design sundials used on the Mars exploration rovers Sprit and Opportunity that landed ion the Martian surface in 2004.  A campaign to build sundials all around our world ensued with the motto “Two Worlds One Sun”.  [photos from NASS]