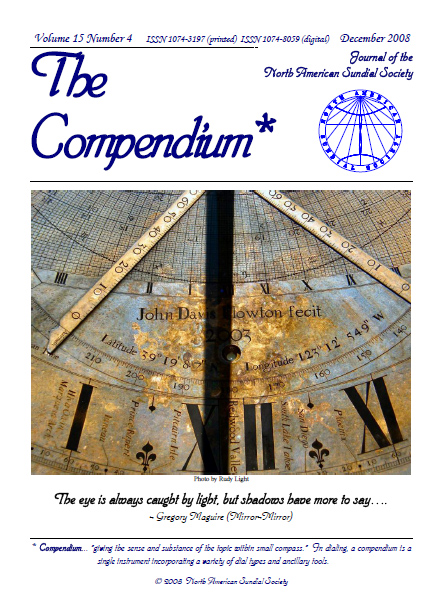 This issue begins with "Sundials for Starters" by Robert Kellogg from Maryland, describing the Cahokia Mounds American Woodhenge built by Mississippian Indians.  Robert then discusses the mathematics of astro-archeology to compute the alignments of the wooden posts for sunrise at summer and winter solstices and at the spring-fall equinox.  During the mathematical investigation Robert exclaims, " Our euphoria at becoming the next Indiana Jones is shattered however when we realize that (1) we have ignored refraction, (2) we've used the center of the sun and may need to use the uppoer or bottom limb of the sun as a realistic, observable marker, and (3) we have ignored the Collinsville Bluffs that rise above the true horizon."  So how do we solve the problem? Read The Compendium and find out.

The Alessandro Gunella from Italy discusses the "Discovery that Lines for Unequal Hours are Not Straight", or at least this was the thinking during the 16th century.  Are they curved or straight?

Next the Connecticut Historical Society discusses the Sheldon Moore Sundial, a popular dial manufactured in Kennsignton, CT during the 1840's. "The manufacture of sundials was commenced prior to August 1840, in which month, a supply was sent to Breck & Company of Boston for sale at 20% commission.  In six months they sold 18 dials, which apparently encouraged Sheldon Moore to expanc his facilities".  How much did they cost?  Read The Compendium and find out.

John Davis of the UK discusses a Triple Horizontal Dial for California. John starts his article with an introduction "There are not many clients for a horizontal sundial that have consulted an original copy of William Leybourn's 1682 book on dialing before arriving to discuss their dial design.  But Dr. Rudy Light of Redwood Valley, California, had done so and also brought a copy of Leybourn's diagram of 'An Horizontall Dial with its Furniture' ... with him when he visited me in the summer of 2003.  When he explained that he wanted a large scientific dial to position ouside his house and that he 'wasn't aftriad of complications', I knew it would be an interesting project."  The result of the project is on the cover of this issue of The Compendium.

And did you know that The Entrance Exam for Japaneese Junior High School students contains questions about gnomonics?  Could you answer the questions correctly?  See if you qualify for Shibuya Kyoiku Gakuen Makuhari Junior High School, Chiba City, Japan.  Barry Duel, an NASS member interviewed the author of the gnomnics questions to find "The science teacher who made the test explained in an interview that he tries to prepare problems that students cannon easily memorize in advance.  He wants students who can think ..."

Read this issue of The Compendium to find these articles and much, much more.