Analemmatic Sundial - How to Build One 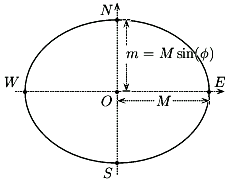 Written just a decade ago Plus.Maths.org provides a good trigonometric explanation of how to construct an Analemmatic Sundial. In their introduction, "An analemmatic sundial is a particular kind of horizontal sundial in which the shadow-casting object is vertical, and is moved depending on the date, or to be more precise, depending on the declination of the sun on a given day. The time is read from the dial by noting where the shadow cast by the vertical pin crosses hour points laid out on an ellipse. If we make the dial on the ground and large enough, we can use the shadow cast by a person. This makes it very different from the traditional sundial we see often in parks and gardens where the shadow is cast by a triangular shaped wedge. The analemmatic sundial is perfect as a piece of large mathematical sculpture."

Read more and make your own sundial: https://plus.maths.org/content/analemmatic-sundials-how-build-one-and-why-they-work 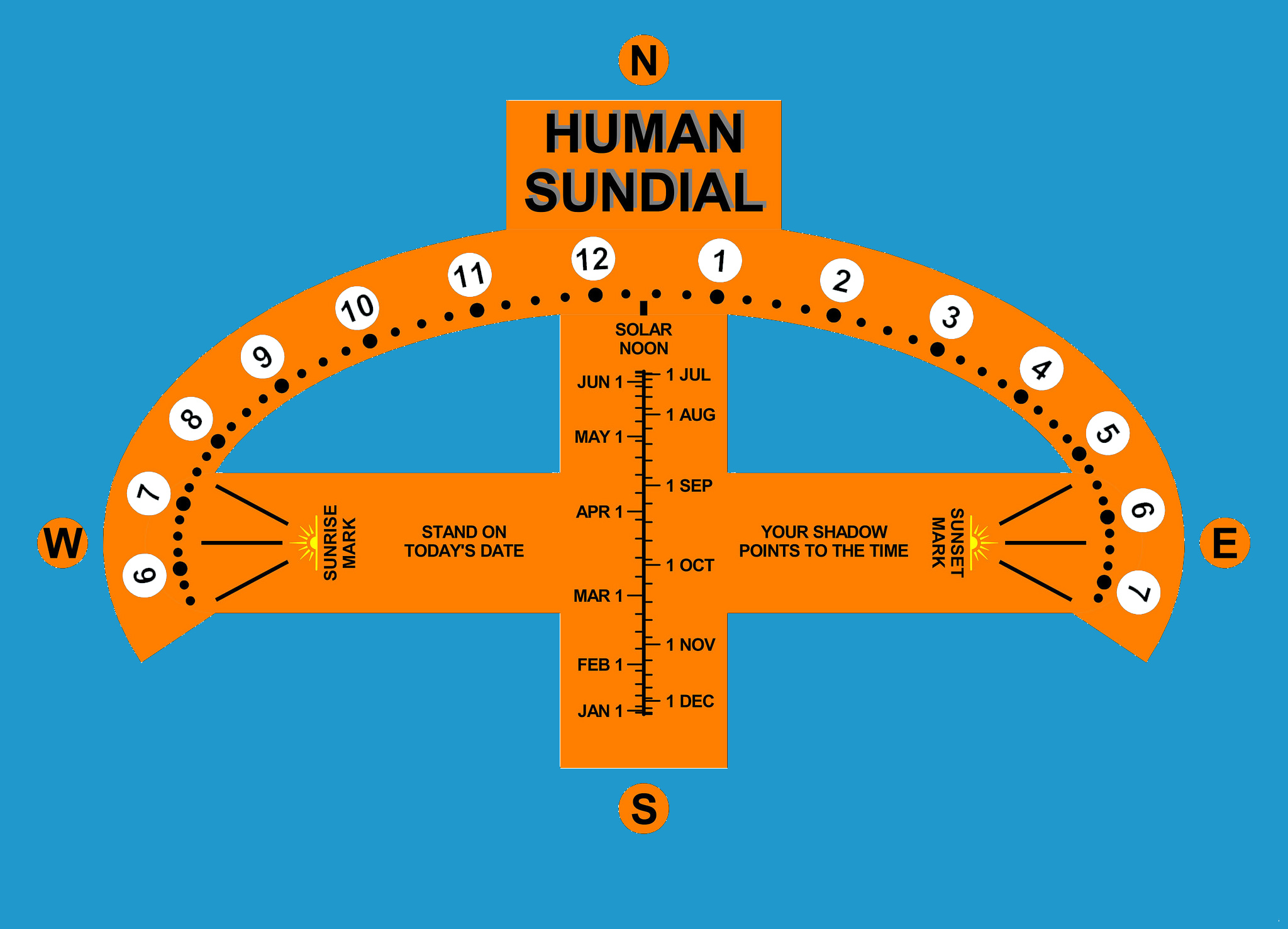 Unlike garden horizontal dials or vertical dials on buildings, the analemmatic sundial requires a moveable gnomon. The position of the gnomon or where the person stands must be changed depending upon the season. A central walkway or guide indicates that a person should stand closer to the sun's noon hour mark at summer solstice and in reverse, stand much further south for the winter solstice. At the equinoxes the gnomon or person stands on a east-west line connecting the solar hours of 6am and 6pm.

Time on the analemmatic sundial is usually read simply with hour marks made on an ellipse. We recommend an ellipse with semi-major axis (the distance from the center of the walkway to the 6am or to the 6pm solar mark) of 6 to 8 feet (2 to 2.5 meters). The semi-minor axis and date marks on the walkway depend upon the sundial's latitude.

The semi-major axis is oriented exactly east-west and the semi-minor axis is aligned exactly north-south.  We'll call the point where they cross the origin.  At the sundial site our first task is to draw out these two perpendicular lines ensuring their east-west (x-axis) and north-south (y-axis) are correctly oriented. Next we need to draw this ellipse.  Here we take advantage of the fact that the distance from one ellipse focus to the ellipse line and back to the other focus is constant everywhere around the ellipse, and this constant distance equals twice the semi-major axis.   Therefore we need to find the distance of the focal points along the east-west line (x-axis).  Their are two focal points: \[ \begin{equation} F_1 = -\sqrt{M^2 - m^2}  \quad \text{    and    } \quad F_2 = +\sqrt{M^2 - m^2}\end{equation}\]. 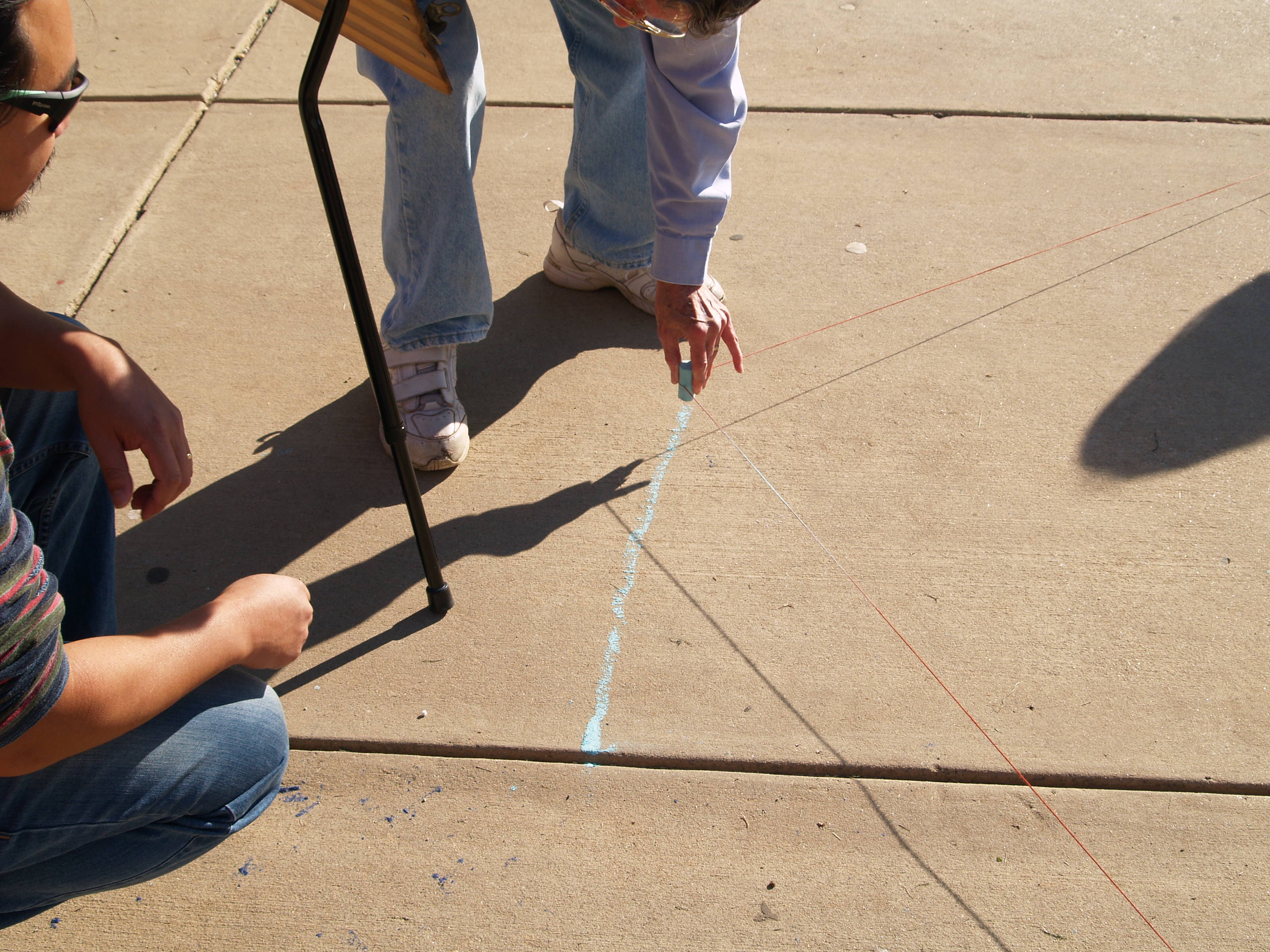 In practice we can draw the ellipse by making a length of string going from one focus \(F_1\) to the solar noon point (semi-minor axis) to the other focus \(F_2\). Then holding the string firm at the two foci, use a piece of chalk pulling the string taught.  As you move the chalk while keeping the string taught, you will trace out the sundial's ellipse.

The walkway is a bit more complicated since it depends upon the distance the sun from the celestial equator.  The sun follows the annual path of 23.4° south of the equator at the winter solstices to 23.4° north of the equator at the summer solstices. This angle is called the sun's declination, noted by the symbol \(\delta\).  At both the spring and fall equinox the sun is on the celestial equator at 0° declination. Let's call Z the distance from the origin up or down the y-axis that represents the place where we should stand: 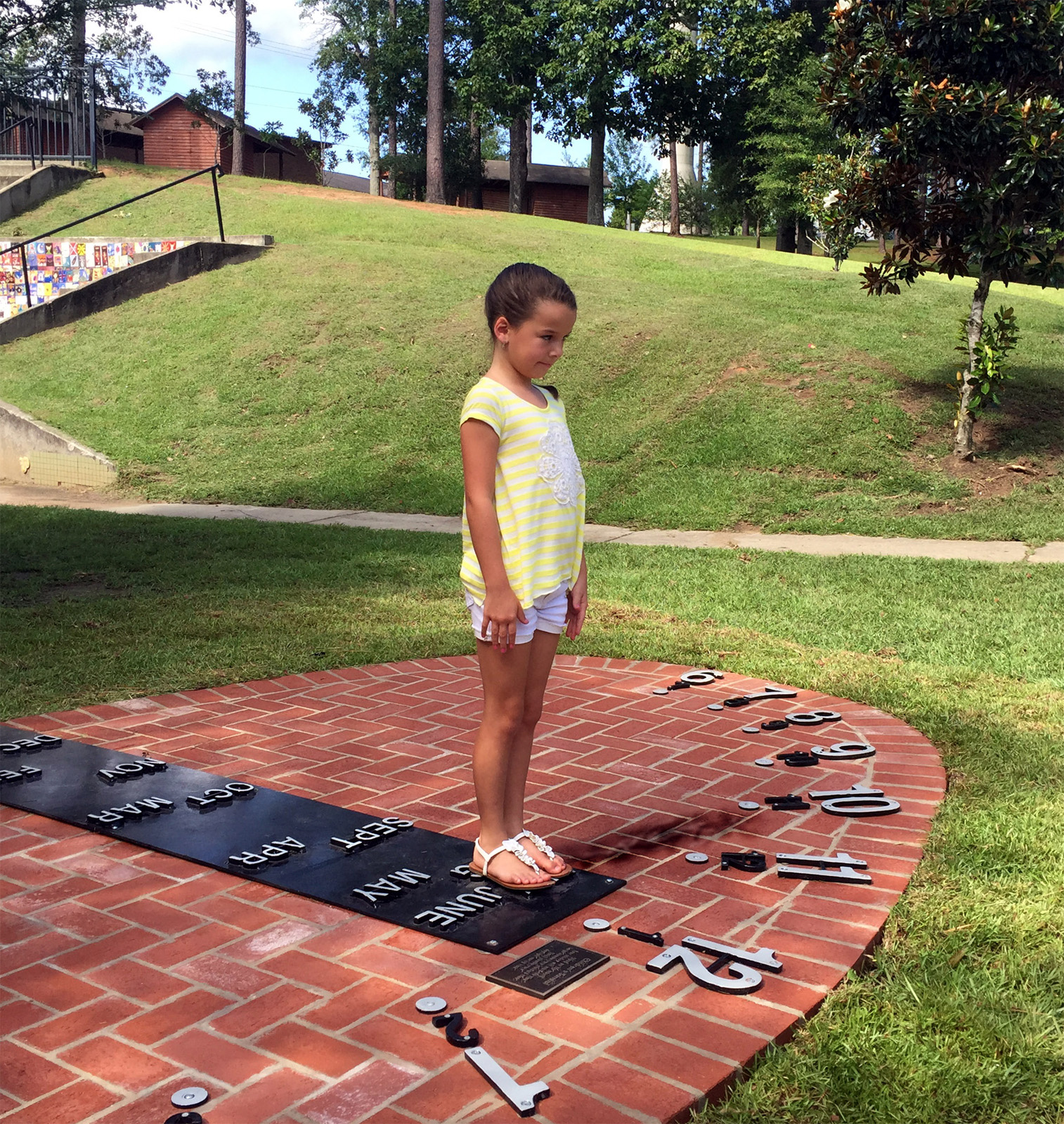 For the best approximation to the BaileyPoint positions, use \(\delta\) = 20°.

Now that you have the theory of the analemmatic dial, here are two attachments that show step by step the layout of the analemmatic sundial and a spreadsheet with all the mathematics for determining the ellipse shape, location of hour marks, Bailey Points, and the monthly distance marks on the walkway. 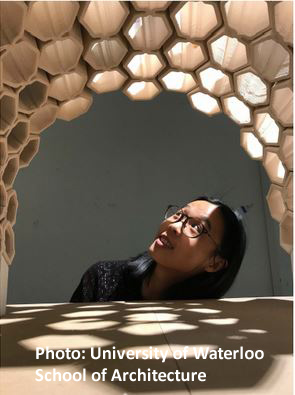 Students at the University of Waterloo School of Architecture in Cambridge, Ontario are experimenting with the benefits of 3D design and printing. In particular Joanne Yau created a set of hexagonal hollow bricks called sundial arches that lets in sunlight from different portions of the arch as the sun travels across the sky. We expect that the length to width ratio of the bricks can tailor sunlight for specific times of the year (summer, spring/fall, or winter).

Joanne Yau was one of three teams challenged to learn how to operate a new industrial 3D printer capable of squirting out clay. Professor Correa, interviewed by 3Dprint.com said “There is no other way to make these kinds of façades without enormous cost and time,” said Correa, who has been involved in 3D printed research on an even more advanced level, studying how such objects respond when exposed to varying degrees of moisture and temperature. “They are completely unique.” “The printer allows us to make much more complex geometry,” said Joanne Yau, part of the team that 3D printed bricks for the ambitious arch/sundial. “To make this by hand or to extrude it would be virtually impossible.”

See a video of how the 3D clay bricks are created in an article by Bridget O'Neal June 5, 2019: https://3dprint.com/245698/whistling-walls-sundial-arches-ontario-architecture-students-3d-print-clay/

Solargraphy - Takes a while - But it's worth it 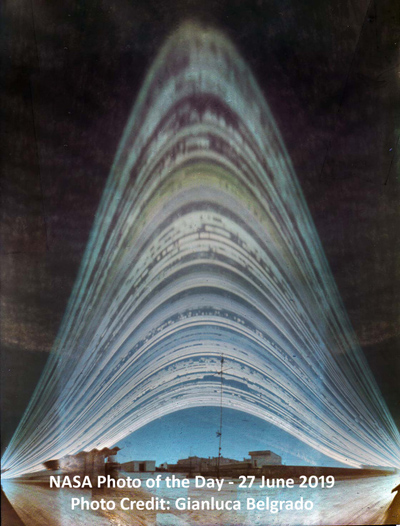 In the NASA Photograph of the Day for 27 June 2019 is a beautiful photograph by Gianluca Belgrado using a pinhole camera. https://apod.nasa.gov/apod/ap190627.html As explained by NASA, "This persistent six month long exposure compresses the time from solstice to solstice (December 21, 2018 to June 16, 2019) into a single point of view....Fixed to a single spot at Casarano, Italy for the entire exposure, the simple [pinhole] camera continuously records the Sun's daily path as a glowing trail burned into the photosensitive paper. Breaks and gaps in the trails are caused by cloud cover. At the end of the exposure, the paper was scanned to create the digital image...."

In 2011 Art Paque explained the art of solargraphy to members of the North American Sundial Society at their annual conference in Seattle.  The construction steps involve creating a pinhole in thin foil, then taping the foil onto a tin can that has photographic paper inside and opposite the pinhole.  The lid on the can is sealed and most important, pointed at the sky with firm support to prevent moving.  The rest is up to nature as the sun crosses the sky each day.  Beautiful solargaphs such as from Gianluca can be obtained with patience tracking the sun for three to six months. In the end your solargarph will be a day by day time capsule of solar observation.

Type "solagraphy" into your web search engine and you will discover a host of sites showing the details of making your pinhole camera.  For example: http://www2.uiah.fi/%7ettrygg/camera.html and http://www.pinholephotography.org/Solargraph%20instructions%202.htm 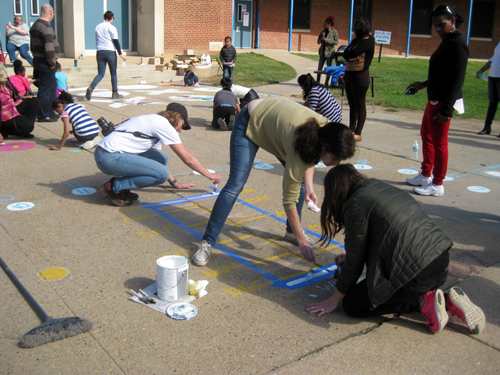