Fred Sawyer, in cooperation with the North American Sundial Society, established a continuing yearly award, the Sawyer Dialing Prize to be presented by NASS to an individual for accomplishments in or contributions to dialing or the dialing community. Each year a panel makes recommendations of those people who have significantly contributed to the art of dialing by their dialing art, their ability to teach and educate, their superb craftsmanship, their care in dial restoration, or in their gnomonic skills in design and computer programming tools for others.

At each North American Sundial Society conference since 2000, the winner is announced and awarded with a certificate of recognition, a small trophy sundial, and a cash award of $200.  Many of the awardees have chosen to use their cash award to help further the art of dialing by donating it to others, increasing the scope of sundialing around the world.  Funding for this award has come from the Sawyer family with a 50% matching donation by NASS.

The certificate and trophy dial presented to each recipient are inscribed with the Greek letters ZHΘI.    The ancient Greeks used the letters of their alphabet as numerals.   When the hours of a dial were to be numbered from dawn to sunset, the numerals used were A, B, Γ, Δ, E, S, Z, H, Θ, I, IA, and IB for the successive hour intervals. By chance, the sequence from the seventh through the tenth hour (i.e. noon through mid-afternoon) spells a Greek word ZHΘI, the second person singular imperative meaning: Live!  The Greeks carried this thought further, and an epigram on the certificate, attributed to Lucian - a second century Greek satirist - exhorts: 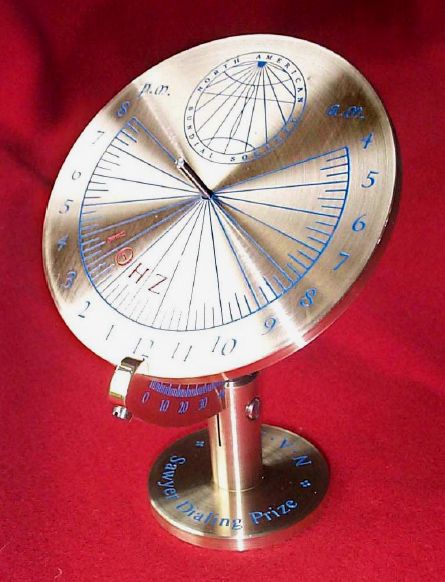 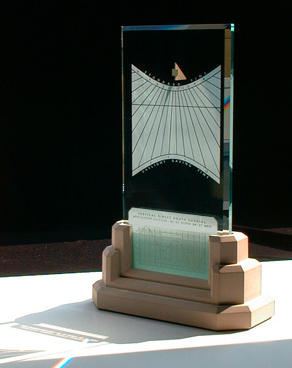 The first three Sawyer Dialing prize recipients received a Universal Equatorial Dials designed and crafted by Tony Moss of Lindisfarne Sundials, UK. [Tony is now retired and the last of the Lindisfarne Sundials has been made.]  The dial can be set for any latitude and is a special edition containing the NASS logo and the imperative ZHΘI.