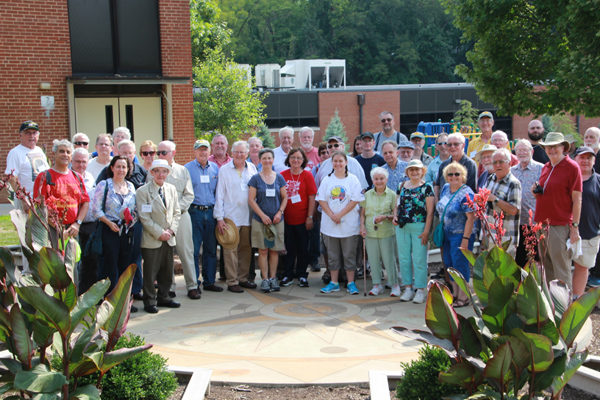 In August 2017 the North American Sundial Society held its annual conference in St. Louis Missouri with a series of well attended talks on the mathematics of sundials, software tools to design sundials, and even videos on YouTube that are about sundials. NASS participants visited local astronomical sites of interest, including the War Memorial Dial in Forest Park. Don Snyder worked with Perry County and Perryville, a town on the eclipse path, to creat a new sundial for the courthouse gardens. Local craftspeople created the dial following Don's design. It, as other significant dials, is in the NASS Sundial Registry available on the web. At the Missouri Botanical Garden attendees saw the Schmoyer Sundial with its analemma shaped gnomon to tell civil time. It was made by Bill Gottesman and donated to the Garden by Don Synder and Bill. Also at the Botanical Garden is the Ottoman dial designed by Roger Bailey, following the design of the horizontal dial at Topkapi Palace in Istanbul. A presentation from Bill Iseminger on the Cahokia Woodhenge discussed the astronomical alignments such as solstice sunrise and sunset. Wood Henge was on the sundial tour itinerary, but due to heavy traffic, was excluded to reach the eclipse viewing site on time (the sun and moon had their schedules that were not subject to change).

The highlight was a visit to Jefferson Barracks to watch the total solar eclipse on August 21, 2019. All participants were given special safe viewing glasses to protect their eyes before and after totality. With cooperating weather, the eclipse was viewed with devices ranging from a pinhole camera obscura to telescopes with solar filters. A truly spectacular event. Bill Gottesman demonstratee his eclipse "sundial" that used the orientation of the eclipsed sun's cusp orientation as an indicator of time.