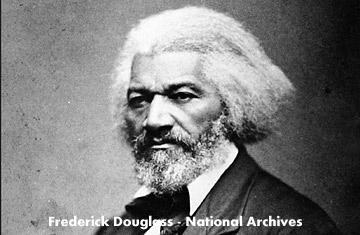 One of the Colored Women's Clubs, the Married Women's Culture Club of Pittsburgh, contributed a sundial to the Douglass House in 1922 when it was opened as a national museum. The sundial contains a challenging motto: "My face marks the sunny hours.  What can you say of yours?"

According to an article in the Pittsburgh Post Gazette by Mark Holan (http://www.post-gazette.com/opinion/Op-Ed/2018/07/22/Marking-time-with-Frederick-Douglass/stories/201807220003) "The reasons that the Married Women’s Culture Club chose a sundial to donate to Cedar Hill are unknown. Having 'secured the dial and prior to sending it east for installation at the grounds,' the club held a July 9, 1922, dedication ceremony at Pittsburgh’s Euclid Avenue A.M.E. Church,' according to The Pittsburgh Press.... Just three Augusts after the Cedar Hill ceremony, more than 30,000 members of the Ku Klux Klan paraded down Pennsylvania Avenue.  Even in the darkest of times, however, the Pittsburgh women’s gift of that sundial at Cedar Hill has marked the sunny hours."

You can read more about the history of the Douglass House and see a photo of the 1922 sundial at http://allenbrowne.blogspot.com/2012/09/cedar-hill.html  The photo taken by Allen Browne shows the dial has survived the years well, except that someone has reinstalled the gnomon backwards.