In 2009 Holland College on Prince Edward Island began a major \(17M renovation and expansion program, including a large open-space quadrangle. Vice President Michael O'Grady was commissioned Tony Moss of Lindisfarne Sundials [now retired] to make a replica sundial Captain Samuel Holland had given to Dartmouth College, New Hampshire in 1773. Tony undertook the work to create a copy of the dial, redeclinating it to the new site in Charlottetown in Prince Edward Island with the proviso that he "might replace the original ... chapter ring scrolls with some of my own design." Tony further commented, "I think the engraver was indulging an apprentice with the less-critical parts of the job..."

The full story of the making of this sundial will appear in the Bulletin of the British Sundial Society and in an article of The Compendium of the North American Sundial Society.

Meanwhile read more of the history behind this sundial:

Most colleges in Canada are named after the province in which they are located; but Holland College was named after Samuel Holland, who surveyed the province as part of his work on the Eastern Seaboard. In fact, there are many Holland descendants on the Island to this day.

Holland College has campuses across Prince Edward Island, but the majority of students are located in downtown Charlottetown, in what is now known as the Prince of Wales Campus (PWC). In 2009, Holland College announced a major campus redevelopment project, which included the construction of the \)17 million Centre for Applied Science and Technology (CAST), the new Centre for Community Engagement (CCE), expansion of the college's residence, renovations to the Charlottetown Centre (the former PWC building), and the creation of more green space.

The green space, a quadrangle bordered by the CAST building, the Centre for Community Engagement, Glendenning Hall, and Grafton Street, was created to give students, staff and residents of the area a pleasant place to relax, and to create a more collegiate atmosphere for the college.

Vice President Michael O'Grady explained how a sundial became the centerpiece of the quadrangle:

"One of the goals of the campus redevelopment project was to honour the historical significance of the location of the original campus, on land that was deeded to the province for educational purposes back in the early 1800s... 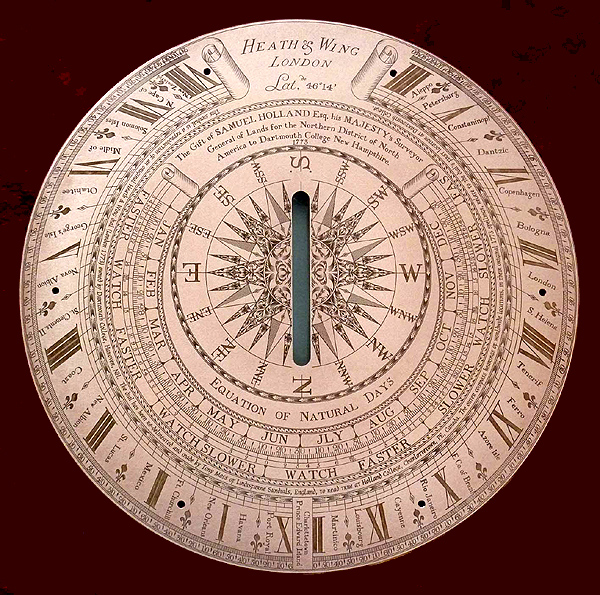 "Among the suggestions was a sundial, which I took upon myself to research. Gladly, that's when serendipity took over and, with several things on my mind on that day, I did a Google search on sundials AND Samuel Holland. Simultaneously. I don't know why ... but, I was utterly surprised and delighted when I came across a historical reference to an iconic and finely engraved brass sundial ...[engraved by the London firm of Heath and Wing ]... that had been presented to Dartmouth College in 1773 by none other than 'our' Samuel Holland, Surveyor-General of the Northern District of North America ... the man who made the map of this [Prince Edward] Island.

"Right away, I put in an inquiry with the Hood Museum of Art at Dartmouth College, a place I knew from previous visits to the campus, hoping that the sundial was still extant, but thinking it was a long shot. I was quickly connected with Dr. Kremer, who was pleased to inform me that the dial, a prized piece of his college's history, was indeed secured in their collections.

"Several months later, accompanied by my then 9-year old son, we traveled to Dartmouth College in search of this institutional treasure. I already had in mind that we would want to make a replica of it for the centerpiece of our own campus. When we viewed the dial in person, I was certain.

[Holland's gift of the 1773 Heath and Wing sundial is the earliest signed and dated instrument in Dartmouth College's King Collection of Scientific Instruments. As explained in a news article about the sundial, "Although Samuel Holland's reason for commissioning the sundial is unclear, legend at Dartmouth College is that he presented it as a token of his faith in the newly-formed institution.] 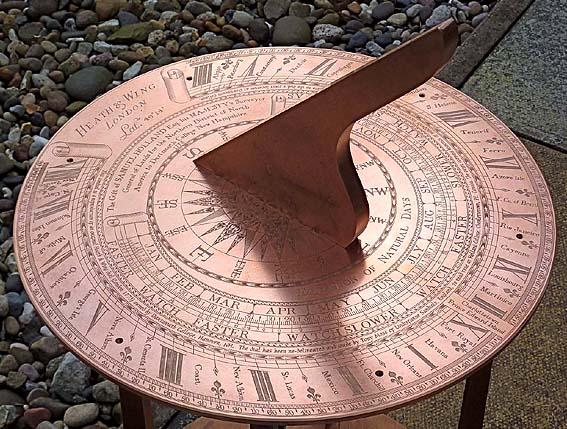 "Tony was recommended to the college by Jeff Lock of Colonial Instruments [an antique instrument restorer] in Ohio. Rich Kremer had phoned Jeff to see if it was a project that he would be interested in taking on. In another serendipitous twist, Jeff was already familiar with Holland College, as I had been in communication with him several times regarding images of period survey instruments for our website.

[And by even more luck, Jeff had been in correspondence with Tony. As Tony recalls, "It was Jeff Lock of Colonial Instruments who persuaded Holland College to approach me. Jeff and I had useful correspondence over my Mariners' Astrolabe and it was then that he saw what photo-etching can achieve."]

Vice President O'Grady continues, "Jeff called me to discuss the project, and at that time told me that he felt the best man for the job would be Tony Moss. Tony spent many, many hours working on our sundial, and more than a few e-mails flew back and forth across the Atlantic as the work progressed.