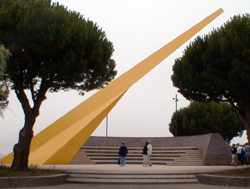 Hilltop Park was built by the San Francisco Redevelopment Agency in 1987 and the iconic 70 foot sundial and nearby skatepark, "The Dish", the oldest skatepark in the San Francisco were in need of repair. Rennovation funding came primarily from the statewide Park Development and Community Revitalization Act of 2008 (Assembly Bill No. 31), which set aside one of its largest grants of \(5 million out of \)368 million to improve parks and recreation facilities in underserved communities throughout California. An additional $1.6M for Hilltop Park renovation came from The Trust for Public Land, Bayview advocacy group Parks 94124 and a private philanthropist.

On December 3, 2016 public officials and community citizens celebrated the opening of the revitalized Hilltop Park. The sundial received a new coat of yellow paint and refurbishment and the Dept of Parks and Recreation upgraded the surrounding plaza, amphitheater and lighting.  "The Dish", was redesigned with a modern flair, and the surrounding park given a surrounding of native and drought tolerant plants.  Meaghan Mitchel concludes an article about the rennovation: "The newly renovated park also boasts adult fitness equipment, picnic area with a barbecue pit, and telescopes as well as educational signage to enhance science and cultural learning opportunities."

Read more in an article by Meaghan Mitchel (January 2, 2017):
http://sfbayview.com/2017/01/bayview-community-celebrates-newly-renovated-hilltop-park/