Jiyeon Song is a very talented media designer who created the One Day Poem Pavilion where here messages flow slowly by on the ground because they follow the movement of the sun. Jiyeon reflects “these slow messages offer the audience time to meditate. We cannot force it to go fast. We should wait. We live under the laws of nature. Slowness affords us time to rethink our lives which are finite and valuable. While the poem is revealed slowly, the meaning will resonate with the audience.”

Done as a project for Masters Thesis for Media Design Program, Art Center College of Design in Pasadena, CA and with patents pending, Jiyeon Song used two layers of press board. The upper layer was a standard grid of holes, but for the inner layer, she had to determine the position of sunlight with a calculator and she then used a protractor and 3D imaging program to determine where rays of light should fall. “Based on the information I gathered about sunlight, I constructed two layers of perforated arrays. To determine the proper position of the full-scale model, I used smaller versions and mock-up prototypes to optimize clarity and legibility of text.”

Song continued, “Three out of four perforated panels contained one line of the poem and each word had an order of appearing as time passed. One of the panels contains two lines and each sentence shows one by one...though the One Day Poem Pavilion has been constructed through the aide of machines, such as the computer and rapid prototyping tools, the focus of the design is clearly on nature as a medium. I believe that the project is a good example of integrating nature and technology with design.” 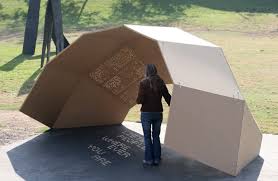 You can see more of Jiyeon Song's work at her website: http://jiyeonsong.com/