A three dimensional sundial house?  You can find it at 10 rue du Diebach, Cosswiller near Strasbourg in the countryside of Alsace in France.  Eric Wasser has created the "Heliodome", a tilted circular building aligned with the earth's polar axis that is a far cry from the old Buckminister Fuller "Bucky Domes".

The house has a glassed southern exposure to allow sunlight during the winter, but from the equatorial belt forward the house has a nearly conventional roof providing shade during the summer.   As Wasser explains on his website, "The passive solar house is an architectural volume, a Heliodome, determined by the diurnal and annual trajectory of the sun."  Read more about the details at http://www.heliodome.com/equipe.html.

All right mate, have a pint of golden sun.  You can pick up a sundial beer glass designed by Jackie Jones for 51o North at The Greys Pub in Southover Street Brighton, or if you're out of the country, the dial will work in Banff, Canada, the European cities of Calais, Brussels, and Dresden, and in Kazahstan or other points of equal latitude

Recent examination of our Sundial Registry revealed dials that no longer exist and have been replaced with something else that might resemble a sundial, but isn't.  Consider the brief entry of Dial 56 that may have once existed in Albuquerque, New Mexico on 9 Mimosa Road:

"5.5' stile, hour lines marked by 1/2' wire rope on grade. Total area is about 1000 square feet.  Analemmatic Dial" The description comes from a typed letter explaining that the dial was "built for research and marketing purposes".

Read more: It Looks Like a Sundial - But Is It?

While using Google Maps, some artists living in the UK became unusual dialists when it occurred to them that the shadow cast by a skyscraper could be used as the gnomon of a really tall sundial.

The forty-seven story Beetham Tower in Manchester is 554 feet tall and dominates the city's skyline.  So it occurred to Annie Harrison, Jude Macpherson and Jacqueline Wylie to use the shadow cast by this structure to chart the progress of the sun as part of an art project.

Its not often a sundial is also a monumental piece of sculpture weighing tons, but that is what developer Fred Steiniger installed this May at the Innovation Corporate Center in Oro Valley, Arizona.  Long-time NASS member and professional dialist John Carmichael was intimately involved with the 3-year long project, which is still ongoing.  Carmichael still has to install a noon-line sundial.  Project completion is sometime this year before the planned dedication slated for noon at Autumnal Equinox.

Located in Port Angeles, Washington, Peninsula College recently dedicated a sundial measuring eight feet in height.  The dial is notable for its unusual design:  the basic construction is one of a polar dial, but also includes the sun's analemma so dial viewers can correct for the equation of time.

The dial was designed by the late Ben Davis and donated to the school in his honor by Honey Davis, his mother.   Installed on campus near the Science and Technology Building, Dr. Tom Keegan perhaps expressed sentiments the best when he said, “Honey Davis’ very generous gift to Peninsula College is deeply appreciated.  It’s fitting that it be placed by our Science and Technology Building so that Ben’s amazing engineering skills serve as an inspiration to our students and encourage them to stop and look and study his sundial." 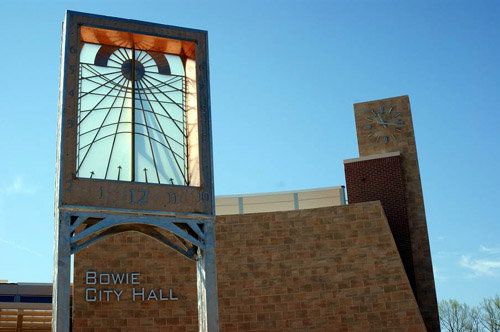 After more than a year of construction, the new Bowie City Hall and the Bowie Portal Dial off Evergreen Parkway and Emerald Avenue in Bowie, Maryland, will be dedicated on the 7th of May, 2011.  The City Hall, Police Station along with two works of public art, an interior mobile and the 15-foot steel and bronze sundial will grace the City of Bowie

A nearly twenty year project to build a sundial near the Arctic Circle in Fairbanks, Alaska was finished this year by Martin Gutoski, a professional surveyor.  Gutoski conceived the idea in 1992 when he reviewed a survey for the local library in Fairbanks’ North Star Borough.  Originally out of concern for safe-guarding survey corners, he got in contact with a local club whose members saw to the landscaping of the library and other public buildings.  One thing lead to another and so began the odyssey that ended just recently.

One interesting aspect that will appeal to anyone who has ever built or contemplated building a sundial is that the dial location is only about one and one-half degrees south of the Arctic Circle.   This is an aspect which Gutoski fully explored with models, first a small one and later a full-scale wooden one, before committing the design to its final form, which uses an airplane propeller for the gnomon.

Click on "Read More" below to see more photos of this sundial.