As reported in Design Bloom architect Kikuma Watanabe has designed a beautiful modern house integrating asundial and solar design principles: "The internal spaces support a comfortable environment where in summer it is naturally cool and in the winter it is warm. This ecological technology aids this passive system using the sun and the wind for an effective air conditioner."

The interior of the house has two-story rooms and lots of natural wood.  But unlike other houses except perhaps for the Cosmic Room in Corregadora, Mexico, it has a built in equatorial sundial. Central stairs lead up to the equatorial dial projection area with the gnomon itself a glass slit window in the roof. But the most important aspects for solar comfort are the angles of the eve overhangs, preventing hot summer sun from entering the windows yet allowing warming sunlight to enter during the winter . Brighter areas such as the kitchen are situated in rooms with southern exposure while the living room faces east looking out upon ponds and hills. Upstairs surrounding the equatorial dial projection ring are two rooms: the Room of Sunrise and the Room of Sunset, and on the main floor facing north is the Room of Shadow.

Texas Christian University (TCU) in Fort Worth Texas will unveil a new longitude sundial on May 5th, 2015. As William Andrewes, creator of the longitude dial explains, "The Longitude Dial is based on an idea proposed in 1607 by Franz Ritter of Nuremburg...Ritter devised and published a world map projected from Nuremburg, with its lines of longitude arrayed to serve also as hour lines. However, the difficulties of creating a new project for each location and the expense of producing it in durable materials were considerable. Ritter's gnomonic projection map does not appear to have been developed for use in sundials - until now."   See Andrewes website at: http://www.longitudedial.com/index.html

One of Andrewes sundials will be unveiled in front of Walsh Performing Arts Center, situated in the middle of a circular stone plaza. Andrewes monumental sundial prices start at $50,000.  Read more at TCU-360 news

As an interesting side note, the gnomonic project map upon which Andrewes creates his sundials was extensively used during World War II and into the 1950's by high frequency (HF) direction finding (DF) sites.  On the gnomonic map not only are lines of longitude straight, but any great circle line of bearing is straight as well.  Using a pin on the DF site, the lines of bearing could be drawn with an extended piece of string.  Computer calculations eventually replaced the manual direction finding and geolocation method. 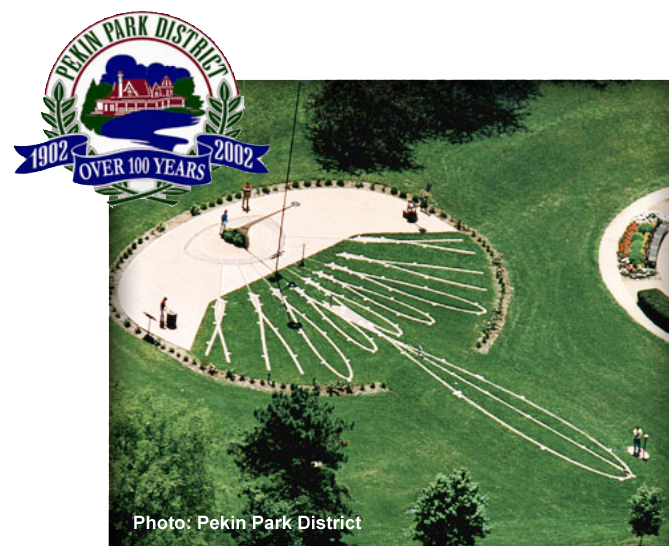 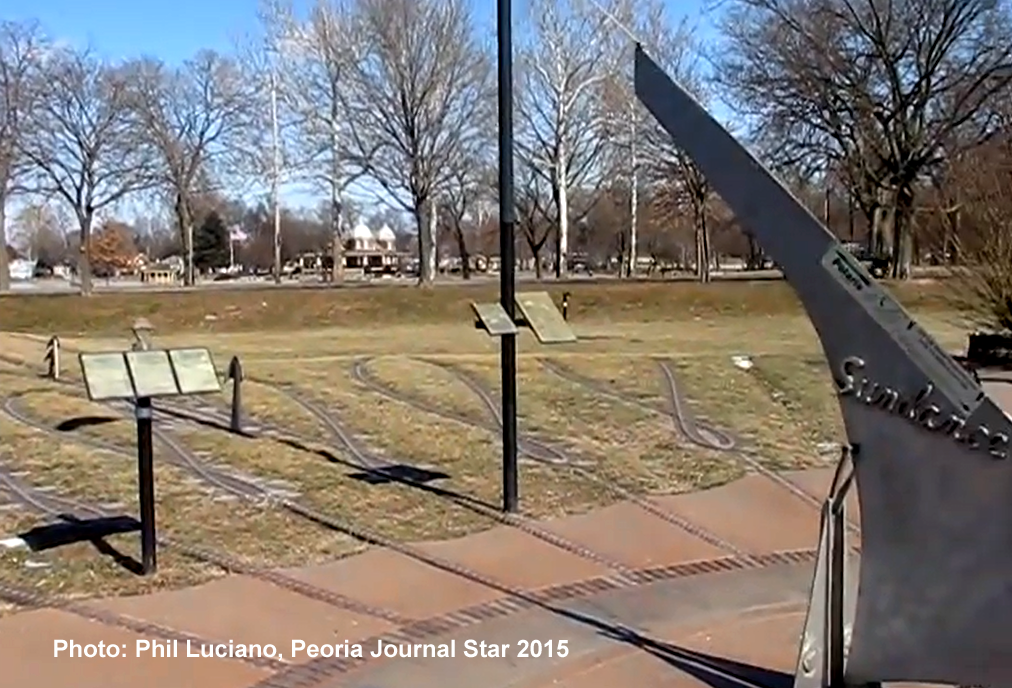 Of the 101 things that play in Peoria, the Pekin Illinois Sundial in Mineral Springs Park is rated #59, and billed as the World's greatest sundial in Pekin, Illinois.  Even Google Maps marks the Pekin Sundial.  The Pekin Park District says: "picturesquely located in the Sunken Gardens in Mineral Springs Park, this unique sundial tells the hours before or after noon and the highest point of the sun on a given day. More interesting information is available on the earth, sun, planets and latitude and longitude at the site."

The Peroria Journal Star interviewed Hentry Cakora, now 79, who built the dial using his family business, Tazewell Machine Parts and convinced the Pekin Park District to provide land for its construction in the Sunken Gardens of Mineral Springs Park.  It's easy to spot on Google Maps just south of Court Street near the park's Lagoon that from spring through fall offers a pedalboat rides.

Cakora who knew about the sun's motion and was good at mathematics created a complex set of sundials.  The main sundial is a horizontal dial about 6 feet tall of burnished steel, surrounded by hour marks on the ground.  But if you're there near noontime there are extra treats.  At the base of the sundial is a thin upright triangle split down the middle allowing it to cast a narrow beam of light toward the noon mark.  Then there is a pole just north of the dial with two flat nodi about 12 inches in diameter, each having a hole in the center.  The lower nodus casts a shadow that each hour falls on an analemma that allows correction for the sun's irregular "Equation of Time".  Charts explain this to the observer as well.  The upper nodus casts its shadow on a noon mark analemma, with small stakes to indicate the soltices and equinox.

Nearby is a planet.  Is it part of a planet trail that starts from the Park's nearby fountain?  Or is there another astronomical explanation? In any event, if the Pekin dial isn't one of the World's greatest, Cakora declares “I’m sure, by far, it’s the most accurate."

Read about it in the Peoria Journal Star:  http://101.pjstar.com/59-worlds-greatest-sundial/    and see at:   http://www.pekinparkdistrict.org/sundial.html 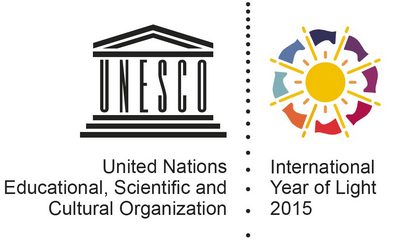 A Letter to NASS regarding the IYL-2015 and the Literary Competition "Words and Light"
I have read the article about the International Year of Light in the website of the North American Sundial Society, and I would like to thank the NASS very much for your interest and for highlighting the International Year of Light 2015 Literary Competition "Words and Light".

I would like to send you the direct link to more details on this competition, as I believe it may be of interest for some members of the NASS (I saw the Art and Literature section in the "Teachers Corner"). The deadline for submitting entries is coming soon - 31 March:
http://www.light2015.org/Home/About/Latest-News/February2015/IYL-Literary-Competition.html
“Words and Light” is a tribute to all the writers who were inspired by Light, writers who were interested in the Science of Light, and scientists who were also poets. The Competition is dedicated to Mikhail Vasilyevich Lomonosov and Johann Wolfgang von Goethe, celebrating the publication of the grammar book by Lomonosov written in 1755 which reformed the Russian literary language by combining Old Church Slavonic with the vernacular (160th anniversary in 2015), and to the book "Theory of Colours" (Zur Farbenlehre) by Goethe, published in 1810, which contains detailed descriptions of phenomena such as coloured shadows, refraction, and chromatic aberration (205th anniversary in 2015).
Thank you very much for your attention and I send you my best wishes.
Yours sincerely,
Ana Luisa
--
Dr. Ana Luisa Simoes Gamboa
Associate Professor, Department of Industrial Ecology
ITMO University (Saint Petersburg National Research
University of Information Technologies, Mechanics and Optics)
Saint Petersburg, Russia
+7 911 716 37 22

UNESCO has declared 2015 the International Year of Light and Light-Based Technologies (IYL-2015). For sundialists, the inauguration of SOLART2 on the June 2015 solstice may be the highlight. SOLART2 is the largest IYL-2015 artistic sundial project in Europe. It is located in Rivesaltes at the northern entrance of Perpignan, France.  It was initiated in 2013 as a strong symbol of sustainable development. Artist MA2F (Marc-Andre 2 Figuères) is constructing the sundial with an incredibly large gnomon created from a double metal bar with numbers silouhettes cut into the structure.   The dial is meant to illustrate the flow of matter and energy, projecting a continually changing shadow of numbers onto the dial face during the progression of solar time.    The edges of the gnomon are painted red "as a visual value and mastery of light".  You can see a video of the dial at: http://ma2f.com/pages/solart2.php

Although Amelia Peabody died in 1984, her legacy and interest in sundials continues. In 1920 she moved to Dover, Delaware, and began raising thoroughbred horses. Ultimately she purchased more than 800 acres in Dover, becoming its largest land owner. She built three houses on her Powisset Farm, three other houses on other properties, and another called the Sun House at 145 Powisset St. in Dover.

As Eleanor Tedesco reports in the Wicked Local Dover on-line news, “The Sun House reflected her interest in heat generated by the power of the sun and was the first of its kind in New England. But the house failed to reach its goal of heating the building with the sun’s heat.” But true to its name, a graceful sundial in the shape of a Nautilus shell decorated her yard.

How do you get the people of your town interested in astronomy?  Robert (Bob) L. Clark a retired professor of mathematics and computer science and member of the Westminster Astronomical Society had the obvious answer: Build a unique sundial.

In the grassy field next to Hoffman’s Ice Cream in Westminster, the Westminster Astronomical Society dedicated a simple horizontal dial attached to a pole with a unique “ornament” … a vertical south facing mirror.

The Andalusia Star News reports that the Lurleen B. Wallace (LBW) Community College in Andalusia, Alabama, has a new timepiece that President Herb Riedel says, “… is a device used for practical purposes to keep time, but they also take on a symbolic meeting. For a college campus, I thought it would be very appropriate because it combines science and art.”

Indeed, the sundial is a large helical sundial, a modern “Renaissance” sundial designed by Bill Gottesman of Precision Sundials in Vermont.