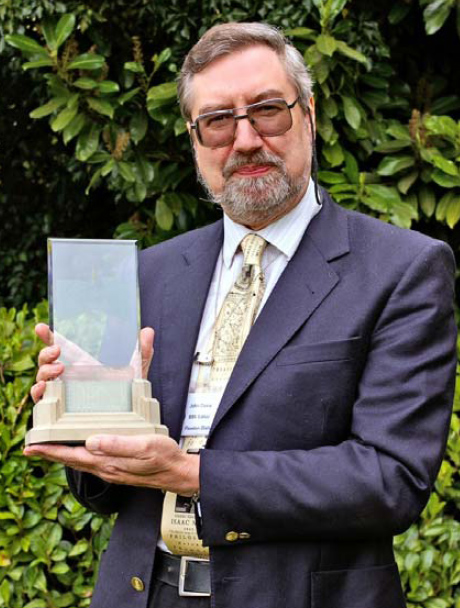 At the 2009 NASS Conference in Portland OR, Fred Sawyer announced that the Sawyer Dialing Prize would go to John Davis of the British Sundial Society, “in recognition of the superb quality of the dials he has created, and in appreciation of his historical research to enhance our knowledge of the dialists who preceded us and the craft they left us.”

The award money was used by John to help place one of his magnificent double horizontal sundials on the campus of Purdue North Central University in Indiana. John was able to show off the Spectra Sundial by Jim Tallman of Artisan Industrials. Fred Sawyer reviewed the portfolio of sundials and restorations by John, showing a replica of a 17 th century double-horizontal dial, several small engraved horizontals, a beautiful 14” circular dial and several dials based on the “Grocers’ Pattern” of the 18 th century.

John created a dial plate for the Isaac Newton sculptured dials at Leicester University and UCLA. In the bronze casting it appears that Newton’s prism casts a beam of light onto an equatorial dial. John has also created everything from vertical dials to pocket dials, including replicas of Humfrey Cole’s 1569 designs. John has also been very active in the restoration of many dials as well. After the award announcement, Fred gave John Davis’ presentation on John Seller, a sundial maker and probable forger who was located in London and worked during the 17 th century.